State of the League

We are at the halfway point of season 8 of 45+45 and have just finished Season 7 of Lonewolf. At the halfway point "Overworked and Underpromoted" have extended their lead with a perfect 8 match points. Round 4 also saw the first round of the season where all games were scheduled by Friday. That meant no shaming of anyone! Wohoo! It also appears that this round had the fewest unplayed games this season. 75/78 games scheduled for the round were played! 3 total forfeits and 0 unplayed draws. Interestingly, all 3 forfeits occured in the same match. Hopefully, these trends continue.

In Lonewolf, the battle for the medals in Lonewolf #7 came down to the top 2 boards. The two players with 8.5/10 faced the two players with 8/10 in the final round. Although both games ended in draws, they were both hard fought! It ended up decided by the narrowest of margins! Congratulations to the winners!

The full final standings can be viewed at https://www.lichess4545.com/lonewolf/season/7/summary/

As Lonewolf season 7 comes to a close, let the Lonewolf mods know how it went and what you want to see for next season! https://lakinwecker.typeform.com/to/sYv2Bn

Lastly, shout-out to 3 players who all recently finished difficult 9 round tournaments.

@artykom recently played a 9 round Swiss OTB tournament in his native Czech Republic. Playing in the top group in Klatovy he scored a respectable 4/9 in a field with several titled players. He achieved close to a 2000 tournament performance rating! Congrats!! He didn't feel there was anything great he wanted to share, but don't be modest, that's an amazing result!

@Aliquantus, You can read more about his adventures in the recent 2017 Nordic Championship below!

Quick updates on the other leagues

@Chessanalyst is back with another life stream of his 45+45 game. Check out @dkillian vs @ChessAnalyst

@kferapont was intrigued by the same game and wrote a blog post about it focusing on the opening, Light Analysis: Ideas in the Closed Spanish. (Study from the blog post included below).

Thanks to @somethingpretentious for his work to automate the process of coming up with these stats. It is much appreciated!

Stats for Round 10 of Lonewolf:

Finally as always feel free to join #lichessledger on Slack if you want to help or contribute in any way to this newsletter.

After being hosted outside Sweden for 25 years, the 2017 edition of the Nordic Championship was hosted in Växjö, a city of 70,000 inhabitants in southern Sweden. In recent years, Växjö Schackklubb has established itself as one of the main organisers on the Swedish chess circuit. This time, 121 players from the Faroe Islands, Iceland, Denmark, Norway, Finland and the host country descended on Växjö to try to become Nordic champion in one of four categories: Open, 65+, 50+ and Women. Aside from money and eternal glory, the winner of the Open section was promised a spot in the next World Cup.

Why not more players? The Swedish Championship is currently underway in Stockholm (with 900 registered players), starting only a week after the Nordic Championship. Playing two nine round tournaments back-to-back is probably too much for most people. What about the Norwegians? Somehow they managed to schedule their championship concurrently with the Nordic Championship, a decision leading to open criticism from Jon Ludvig Hammer.* This meant that the highest rated Norwegian came in at 2092. With the top players of Norway out, the heavy ranking favourite was Nils Grandelius of Sweden, coming in at 2655, 101 points higher than second seed Erik Blomqvist. In the end Grandelius would finish second (on tiebreaks) after the experienced Jóhann Hjartarsson of Iceland, who thus qualified for the World Cup.

As for my own tournament, I got trapped in the so-called "swiss elevator", alternating between clearly stronger (with White) and weaker opponents (with Black). Although I played very well strategically in most of my White games, I scored a measly 0.5/5. In three of the games I was +2 around move 30, only to collapse in time trouble every time. (It's not for nothing that I am board 1 of "Never Not in Zeitnot"). With Black I was clearly worse in 3/4 games against weaker opposition, but still came out with a score of 3.0/4. Overall, I guess I'm happy to get great positions against strong players, but unhappy about botching them.

I have included sequences from two of my games. The first I found instructive because it shows how quickly a strong player (not me) can turn around a bad position if the other player (me) is not careful (I wasn't). The position quickly went from "complete control and slow conversion" to "he just played five straight tempo moves and I lost control, what's going on??". The second showcases how one can exploit a weak colour complex around the king.

*https://www.chess.com/no/blog/SultanOfKings/skandalekollisjon (Warning: It's in Norwegian and on that other chess website. Title: "Scandal collision")

From a round 11 game on board 1 of Lonewolf (a deciding game for the medals): @heimoelo vs @chess4life. White just played Bc8. Black to move. Difficult sequence of moves to spot, but it gives black a decisive advantage! 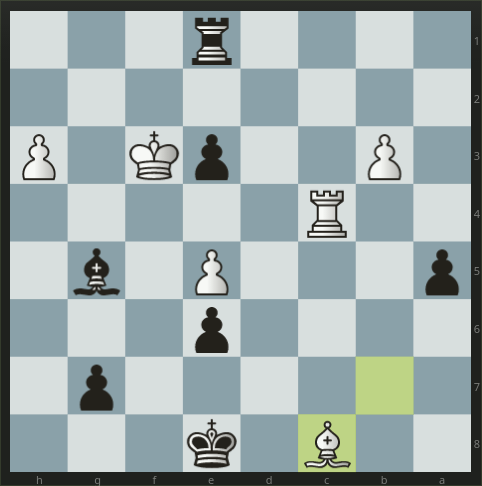 For the answer see gamelink.